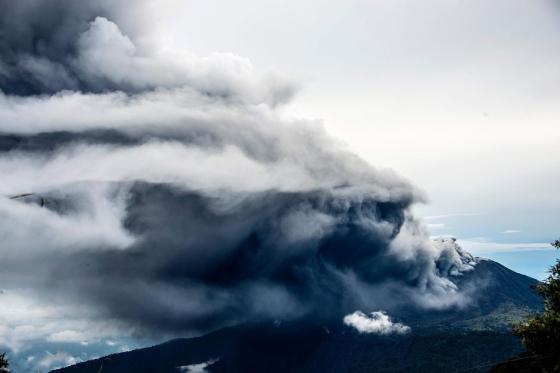 A volcano in central Costa Rica is spewing smoke and ash 9,840 feet (3,000 meters) into the sky, sending hundreds of people to the hospital with breathing difficulties and forcing dozens of flights to be diverted.
The volcano, called Turrialba, is about 30 miles (48 kilometers) east of the capital city of San José. According to local reports, buildings there are blanketed in ash and the air reeks of sulfur.
Costa Rica is home to dozens of dormant volcanoes, but Turrialba is known for its more regular activity. Twice last year, eruptions shut down the airport in San José because of low visibility. The latest volcanic activity began on May 16 with an explosion of gas and ash, according the Smithsonian Institution’s Global Volcanism Program, and several long-lasting and strong earthquakes have been recorded.
Even with this history of activity, the eruption happening as of May 21 is particularly strong.
“It seems to me to be the strongest [Turrialba] eruption in the past six years,” volcanologist Gino Gonzalez told reporters at a press conference.
Turrialba is what’s known as a stratovolcano, a conical-shaped peak akin to Mount St. Helens in Washington State and Mount Etna in Italy. These are the deadliest volcanoes. When a stratovolcano explodes, toxic gases and hot volcanic fragments can race down the mountainside with hurricane force.
Turrialba is 10,960 feet (3,340 meters) tall and covers more than 190 square miles (500 square kilometers), making it one of Costa Rica’s most voluminous volcanoes. Tourists used to be able to hike into the main crater, but the trail has been closed for some time due to increased volcanic activity.
Reblogged from National Geographic

While exploring in Vara Blanca, Costa Rica, Your Shot photographer Sammantha Fisher captured this image of the nocturnal red-eyed tree frog. By day, these amphibians sleep stuck to leaf bottoms. When disturbed, they flash their bulging red eyes to shock predators.

“I had seen a very large waterfall from the roadway that I hoped to explore and get a better shot of,” says Fisher.  “I hiked down a hill into a heavily forested area, making it very difficult to still see the waterfall, and with the daylight fading, I decided to turn back. As I turned around a red-eyed tree frog hopped onto a leaf in front of me, staring right at me. I was able to slowly step away … lifting my camera and taking the shot before it jumped much higher to the next leaf.”